The Dorper sheep has been bred to produce fast growing, meaty lambs which can gain 70 pounds in 90 days. The Dorper is known also for its hardiness and was developed to be able to gain weight rapidly on pasture alone Dorpers are also very fertile with the ability to lamb every 8 months.

Perhaps one of the most labor reducing attributes of these sheep is that they do not require shearing. This eliminates several drawbacks: the cost and hassle of shearing, crutching, and fly control. You also don't have to dock: as there is no manure and wool build up it makes the risk of fly strike next to zero. Their coat is a combination of loose wool and hair fibers. The wool sheds off in the springtime, however this is something which must be encouraged and bred towards. At Bubblin Brook we strive to strengthen this trait.

An added bonus to the Dorper is their excellent hides. In South Africa Dorper hides are sold as top quality leather under the name "Cape Glovers" and represent 20% of the total carcass value. They are a commercial meat lamb, not wool sheep or novelty items with no commercial value.

The Dorper has proved that it can replace traditional uneconomical livestock industries anywhere and this is especially evident in Namibia where the Dorper has almost completely taken over from the Karakul Sheep Industry where the lambs were killed for their skins. From these changes in the industry, international Dorper breeding businesses are now conducted virtually from the Kalahari Desert. In South Africa the Dorper replaced the existing Meat Sheep Industry after its development in the 1930s and now very few other sheep breeds are grazed on the vast open plains of western South Africa.

The resultant sheep has become a hardy adaptable animal eminently suitable for the arid regions of South Africa and Namibia and has proved that it can adapt to all environments around the world. 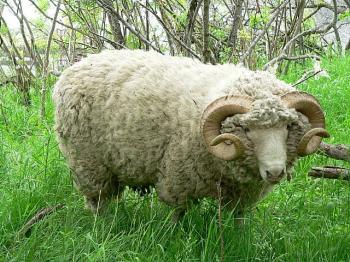 In the early 1930's South African farmers sold their surplus lamb and mutton to the European market. However, the carcasses were rejected because European consumers were accustomed to the higher quality Canterbury lamb from New Zealand. The South African Meat Board took on the challenge of producing a meat sheep breed that would produce a higher quality carcass and yet, thrive under the arid to semi-arid conditions of South Africa. A breeding program was finalized in 1946 and the Dorper breed is what we have today. The Blackhead Persian sheep, a hardy, fat-tailed desert breed from Arabia, brings to the Dorper its hardiness, thriftiness, adaptability, pigmentation and hairy coat. It also brings remarkable fertility, with the ability to breed every eight months and to produce a high number of twins. In addition, the Persians have very valuable skins used in the production of fine leather products. The Dorset Horn rams crossed with Blackhead Persian ewes produced fast growing and heavily muscled lambs yielding very satisfactory economic returns under a variety of environmental conditions. The result was a sheep that was hardy and tough enough to survive in any environment around the world. Which it has been proving in the Kalahari desert of Africa with dorpers making for 80% of the herd in Namibia. The ewes from this cross were excellent mothers that could be bred in any season.

In the early 1950's, a controversy arose concerning black markings vs. a pure white sheep. Some breeders preferred a white sheep while others chose to select for confirmation rather than color and use the black markings as their trademark. In 1964, the controversy was settled when the blackhead and white Dorper breeders united into one association calling the black head sheep Dorpers and with the unmarked being called White Dorpers. Two categories exist for Dorpers and White Dorpers in the American flock book.

In recent years, the Dorper has become popular in the Middle East, China, Canada, Australia, South America, Mexico and the United States, where it is among the fastest growing breeds.